Why Don't Koreans Use Their Dishwashers? 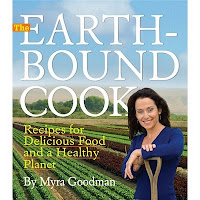 Today’s post is part of the From Left to Write online book club. The idea of this book club is not to write a book review but to write a post in which the blogger connects that month’s book to an experience from his/her own life. The current book is The Earthbound Cook

I don't know anyone born in Korea but now living in the U.S. that actually uses their dishwasher on a regular basis. Instead, they use them to store dishes. In some cases, they don't use them for any purpose and just leave them empty. Of course they don't want them to break down so they'll run them (with nothing inside) once a month. My non-Asian friends seem to think this is odd. This post is my exploration into the reasons why this phenomenon exists. (A friend says Vietnamese people in the States don't use their dishwashers either, but I'm not qualified to guess the reasons so if you know, please share.)

I think there are two main reasons why Koreans in Korea don't have dishwashers:

1. Space. Korea is a small country roughly the size of Portugal with a population of approx. 50 million people. 10 million or so live in the Seoul metropolitan area, with approx. 92% of the entire country's population living in urban areas (facts from Wikipedia). That means apartments are small and so are kitchens. There is just not enough cabinet space to store the number of dishes that would be required to allow the use of a dishwasher. Most people still do full Korean meals three times a day. If you look at the photo on the left, you can see that this requires many many dishes. A family would not have multiple sets of these dishes to use. I point this out because I learned from The Earthbound Cook that a full dishwasher takes less energy and water than hand washing dishes. But Koreans would not be able to wait for the dishwasher to be full. Even my Korean friend who lives in Manhattan Beach, CA doesn't have the space for the number of dishes this would require. She does the full Korean meal for her in-laws every meal, every day and she washes dishes after every meal. If she didn't, she wouldn't have all the clean dishes she needs for the next meal.

2. Cost. Like I said above, a full dishwasher takes less energy and water than hand washing dishes. A non-Korean friend (married with two kids) told me that it takes her a day or two to fill up her dishwasher. In the case of Koreans doing full Korean meals, the necessity of having to use the same dishes for the next meal probably means that the dishwasher, if it is used, would run when it is not full thus negating the energy and water cost savings. Koreans, being cheap about these kinds of things, would definitely balk at having to pay for the extra cost. It seems like everyone in Korea has the current season Louis Vuitton purse or Burberry jacket, but no one wants to spend a dime more than they have to for things that people cannot see.

Then we moved to California. Being a stay-at-home mom meant that I had to wash a lot more dishes. Having two kids instead of just one also seemed to multiply the number of dishes and cups exponentially because for some reason, if one kid wanted a snack or drink, the other kid had to have it too even if you knew they didn't really need or want it. I would really have liked to use the dishwasher BUT...ants, ants, and more ants. I had no choice but to wash the dishes after every meal, even after we finally capitulated and got the exterminator to spray his noxious chemicals. I was paranoid that an unwashed dish would start the nightmare all over again. 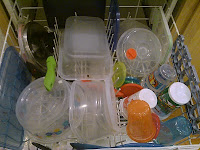 Which brings me to Northern California and The Earthbound Cook. After reading that section on dishwashers, I decided to give it a try and actually used our dishwasher three days in a row. I had a one day relapse and then got back into the rhythm of putting dishes away. Once you start doing it, it becomes a habit!!! Hurray!!!! I've successfully overcome my Korean cultural indoctrination and am using my dishwasher to wash dishes instead of storage. It's amazing how a few sentences can make a change in a person's everyday life. Thank you Myra Goodman and the From Left to Write Book Club! Now I better go and start the dishwasher.

I received a free copy of The Earthbound Cook

Email ThisBlogThis!Share to TwitterShare to FacebookShare to Pinterest
Labels: Earthbound Cook, From Left to Write

Um - I think I may be the exception to your rule. Growing up in a household where we didn't use the dishwasher turned me into a dishwasher using FIEND when I finally had a place of my own. I ran that sucker all the time. Still do.

Thank you for this unique and facinating spin on The Earth-Bound Cook! I loved reading this blog.

an interesting use of your newfound dishwasher: http://www.startribune.com/lifestyle/homegarden/107602068.html?elr=KArksUUUoDEy3LGDiO7aiU

You know what else my Mom used for storage? The oven. Basically she only used the stovetop to cook and would always cook on the highest heat setting so that things were always at a full rolling boil on the burners. I always thought that this was because that was the closest approximation to the heat source she was accustomed to cooking on, namely, FIRE.

It's against my natural instinct NOT to use my dishwasher. When we moved to Germany and found out we had to hand wash dishes, I began to foam dish suds at the mouth in a near panic! How funny that you have to push yourself to use what I can't live without.

I live in Korea. No one owns dishwashers. They cost money to run, and so they're a waste of money, when they could just be washed by hand for the cost of dish soap. It's like clothes dryers. No one owns them. Why pay for something that the air will eventually do for free? That's the culture. Thrift is a national virtue.