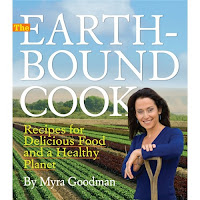 Last Wednesday was the first pot luck dinner of the From Left to Write Book Club. Those of us in the Bay Area got together at co-founder Linsey's house and brought dishes from Myra Goodman's new book, The Earthbound Cook

, one of this month's book club selections. I really enjoy the book because it interweaves "green" tips for living with recipes and also gives shortcuts in case you can't source the fresh ingredients she recommends. I like that non-judgmental aspect--no finger pointed saying, "naughty, naughty, must always use organic."

It was the first time leaving the boys with a babysitter since moving to San Jose. I was a bit apprehensive (the one and only babysitter we had in LA had been completely overwhelmed by them and basically we paid her to watch them watch TV), but absolutely needed to go to the meeting. Before Wednesday's event, I could count on one hand the number of in person meaningful adult conversations I've had since moving. I was the first one there and one of the latter ones to leave. It was a wonderful night of meeting new women,eating delicious food, and just getting out of the mom mode for a few hours. You can see for yourself why the meal beat eating the boys' leftover pasta, and the photos I took don't even do justice to all the fabulous dishes that the other ladies brought. I made the gruyere frittata, which was so easy and so delicious. 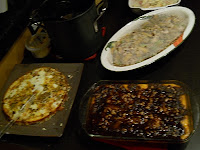 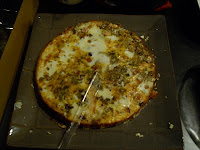 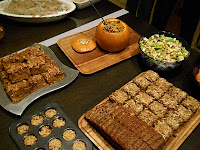 That afternoon while I was prepping the frittata, the doorbell rang. I opened the door and found on my doorstep Norah Jones' new album, ...Featuring Norah Jones

that I had signed up to review for the One2One Network in advance of its release this Tuesday, November 16. I was so excited! It was perfect timing, I would listen to the CD on the way back and forth from the book club meeting. I NEVER get to listen to my own music in the car so it felt that all the stars were aligning for that evening. The frittata was cooked, the babysitter came on time, and I had a new Norah Jones CD to listen to on the way to a night with great writers and foodies.

The album turned out to be exactly right for the drive to the book club meeting because of rush hour traffic. Since I was driving alone, I didn't have H in the back repeatedly saying, "Don't be Mad, Don't be Sad," which he breaks into whenever we get into a traffic situation on the freeway. Featuring

is a star-studded collection of Norah Jones’ musical collaborations from the past decade. Her smooth melodious voice helped keep any road rage down to a simmer, even when people cut me off or the traffic came to an abrupt stop on 880 South. The 18 songs on the album include duets with such legends as Ray Charles, Willie Nelson, and Dolly Parton, and with 21st Century icons from OutKast to the Foo Fighters. The tracks on Featuring span Norah's entire career, from one of her earliest recording sessions (a version of Roxy Music's “More Than This” with guitarist Charlie Hunter in 2001) to her most recent performance she cut with Belle and Sebastian, which will also appear on their new album. This album really has something for everyone, from blues to jazz to hip-hop. My favorite was her duet with Willie Nelson, "Baby It's Cold Outside

." It reminded me of the old musicals I love and filled me with the warm and fuzzy feeling reminiscent of those classic movies. 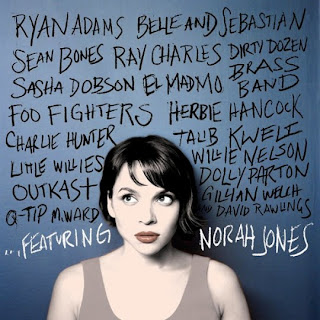 The music was still great, but I found Norah's soothing voice was not so perfect on the way home when I was struggling to stay awake after having eaten three plates of food and two bowls of soup. I'm looking forward to playing the CD again on my next outing without the boys. I have high hopes that that will be in the near future since Stewart came home to find the boys and the babysitter still playing, not watching TV!

I did not receive compensation for this post. I received product samples to facilitate my reviews.
Posted by Eunice at 8:57 PM

Great to know! :)
You should try playing in the car when the boys ARE there....maybe it might mellow them out or put them to sleep. ;)