The Ants Go Marching One by One

A few months after we moved to California from New York, we woke up to a stream of ants walking across our dining room floor. We killed them and tried to be more vigilant about crumbs. Our second baby, R, was only four months old at that point so we didn't want to use any pesticides. We put into action every natural method for bug prevention in the book. We swiffered every night, put all open food in the pantry in containers, and did the dishes after every meal. This was not enough to deter the ants so we tried natural remedies recommended by friends and the internet. First, we tried rubbing lemons all over the edges of our windows because someone told us that ants do not like lemons. This worked about as well as the California fiscal budget process.

Then we poured baby powder around the edges of all the rooms because ants will suffocate if they cross that line. This worked to some degree but there was always some point in the baby powder line that the ants could pass. It was also inconvenient to have to explain to guests that the white substance all over our house was baby powder. It would migrate over to the floors, get on my kids' hands and feet, and then tracked everywhere. Next was Orange Guard

, which also worked at some level but we just couldn't spray it in every crevice from which the ants were coming.  Then we bought baits for inside and outside the house and put them in places where our kids couldn't reach. Apparently the ants couldn't reach them either because they didn't work. By this point, the daily fight against the ants had turned my mouth into that of the meanest of the mean stereotypical foul-mouthed truckers. (I have to admit this was a turning point in my life from which I haven't been able to retreat.) Every time the song The Ants Go Marching One by One was on Elmo's World, I had to restrain myself from throwing the remote at the TV.

The final straw came the day when an ant was crawling on R's face. We called the exterminator. By this time R was seven months old. There must be something magical about the six month birthday, right? After all, this is the point when doctors say you can start using sunblock on your baby, so their bodies must be able to withstand topical chemical contact. Whether this was mere rationalization on my part, I couldn't risk the chance of a queen ant crawling inside R's nose or ear and laying a colony in his brain (yes, I know highly unlikely, but I looked it up on the internet and it has happened!). The exterminator came. He had to come for one followup visit a week later but we haven't had any ants since the week after Thanksgiving 2008. 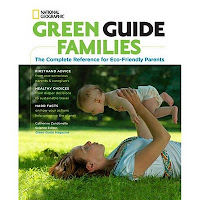 Of course, this post is a cosmic invitation for the ants to invade again. I told my husband Stewart if I see even one ant, I will call the exterminator the same day. I was reminded of this crazy episode of my life (I'm sure everyone I met during that period thought I was some neurotic psycho because I would talk about the ant attacks all the time) while reading this month's Silicon Valley Moms Blog book club selection, Green Guide Families: The Complete Reference for Eco-Friendly Parents

. I was happy to read that I had followed all the tips on how to ward off pests before turning to pesticides as a last resort, which provided some comfort. I'm excited to learn about other ways to become more eco-friendly so I can be a good role model to my kids. But I have to think that if being green is going to drive you insane and make you miserable, then you can't function as a good role model. Some people can live with ants all over their house. I cannot. I'm appreciative that the Green Guide recognizes this and didn't call for an absolute ban on pesticides. I will be sharing some more tips from the book in my Earth Day post. Stay tuned.

This post was inspired by this month's Silicon Valley Mom's Group Book Club selection: National Geographic's Green Guide Families: The Complete Reference for Eco-Friendly Parents by Catherine Zandonella. I was sent this book from the publisher for review purposes.
Posted by Eunice at 6:31 PM