A couple weeks ago, my friend Heather came by to borrow a baby swing for her third child. She was decked out in full makeup, a slinky black dress, and 3-inch heels. I asked her if she was on the way to a party and she said that was how she had to look to go pick up her oldest daughter from pre-school. Apparently she dropped her off 1 day without putting on makeup and her daughter told her not to pick her up unless she was wearing makeup because, without it, she was not pretty enough. O-kay! That is the difference between the mom of girls and the mom of boys. The girls keep their mommy looking pretty and trendy and the boys keep their mommy looking like she just stepped off the rugby field. And that is exactly what I look like most days. If I can get some lip balm on my lips, I'm lucky. So when my friend @mintcool told me she was hosting a makeup party a few weeks ago, I gladly signed up.
The makeup was provided by e.l.f. (eyes lips face) and the party was catered by Fresh Brothers. Hollywood makeup artist Shannon Hughey was there to give us tips and pro photographer Laura Joyce was there to capture all the fun. Since it was my birthday, Shannon picked me to be the makeover model. I was so excited! She taught me how to do a 5-minute face and then layered on smoky eyes to complete the makeover. I definitely looked like I was ready to hit the club! I wanted to keep it on and surprise the mommies at pre-school drop off the next day, but I knew there was no way I would be able to sleep in one position and not get makeup all over my bed. Since that night I've been trying the 5-minute face a few times a week. It's strange how doing something so simple can make a difference in how you hold yourself. I think it's not really about layering on the makeup, but the act of doing something for yourself to prepare your self mentally to present yourself to the world instead of just trying to sneak around as quickly as possible without having people look at you (my usual m.o.). 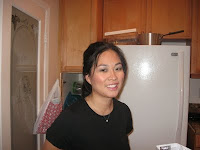 There used to be (and may still be) an email going around that Nordstrom had bought e.l.f. and the makeup was on clearance for $1. This isn't true, but the low price of the makeup is true. A lot of people think that something cheap must be bad but Shannon said that wasn't the case. You pay for the name of the higher end makeup but the makeup inside is the same, compare the e.l.f. duo blush/bronzer at $3 to the one from NARS for $45. I think I know which one I want. They just started selling the e.l.f. studio line and the mineral line at Target. Maybe I'll see you at the endcap.
Posted by Eunice at 2:44 PM

wow. hot momma! maybe you can show me how to do the 5 minute face