We lived in Los Angeles for almost two years. Funny how you don't get to do touristy things when you actually live in a place unless you have relatives coming to visit from out of town. While we lived there we had never been to the Griffith Observatory, Universal Studios, La Brea Tar Pits, and quite a few other iconic LA destinations. Stewart's sister lives in LA. We hadn't been able to make it down to see her December-born baby so decided to make a whirlwind trip of it for Spring Break. 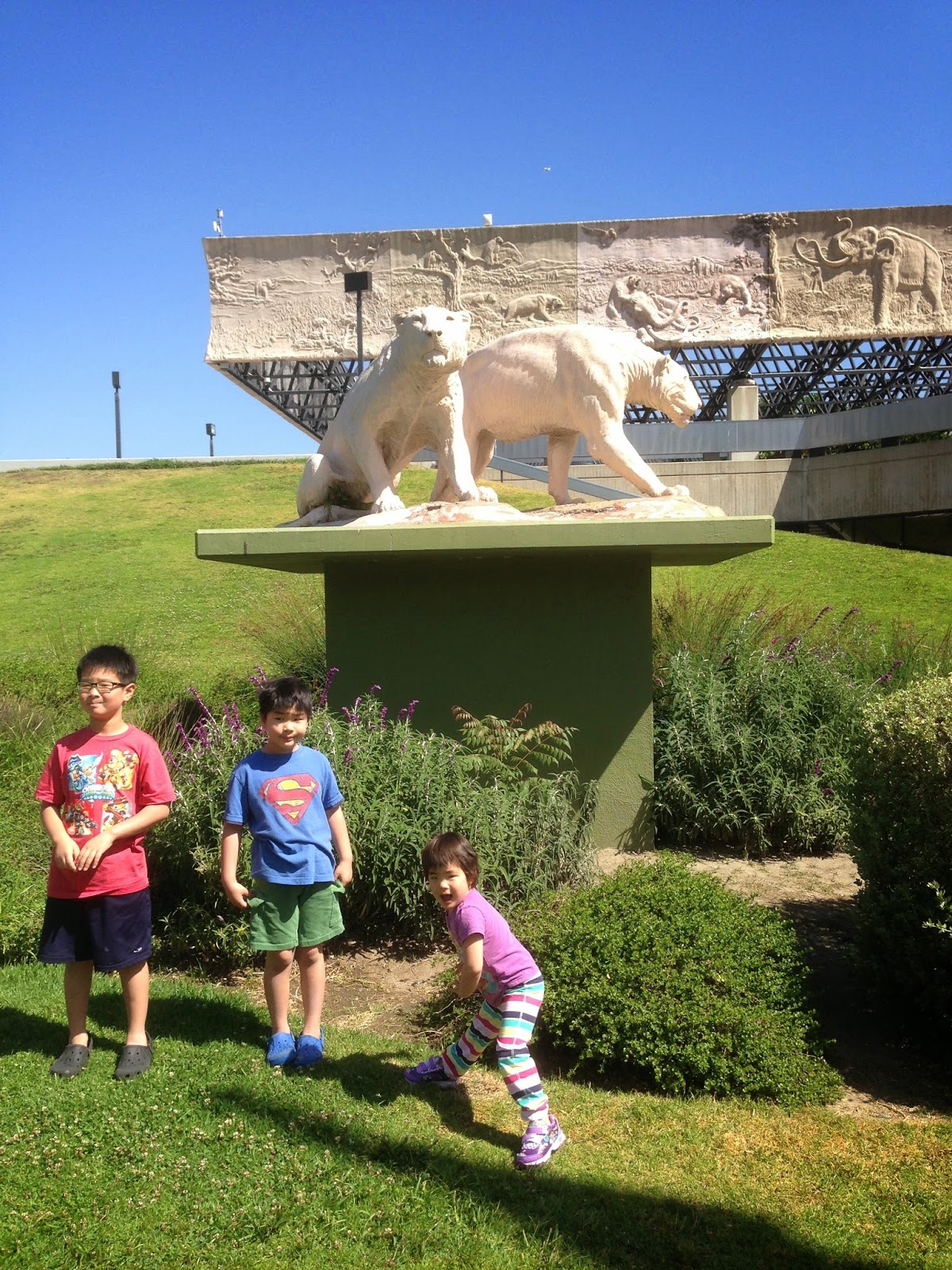 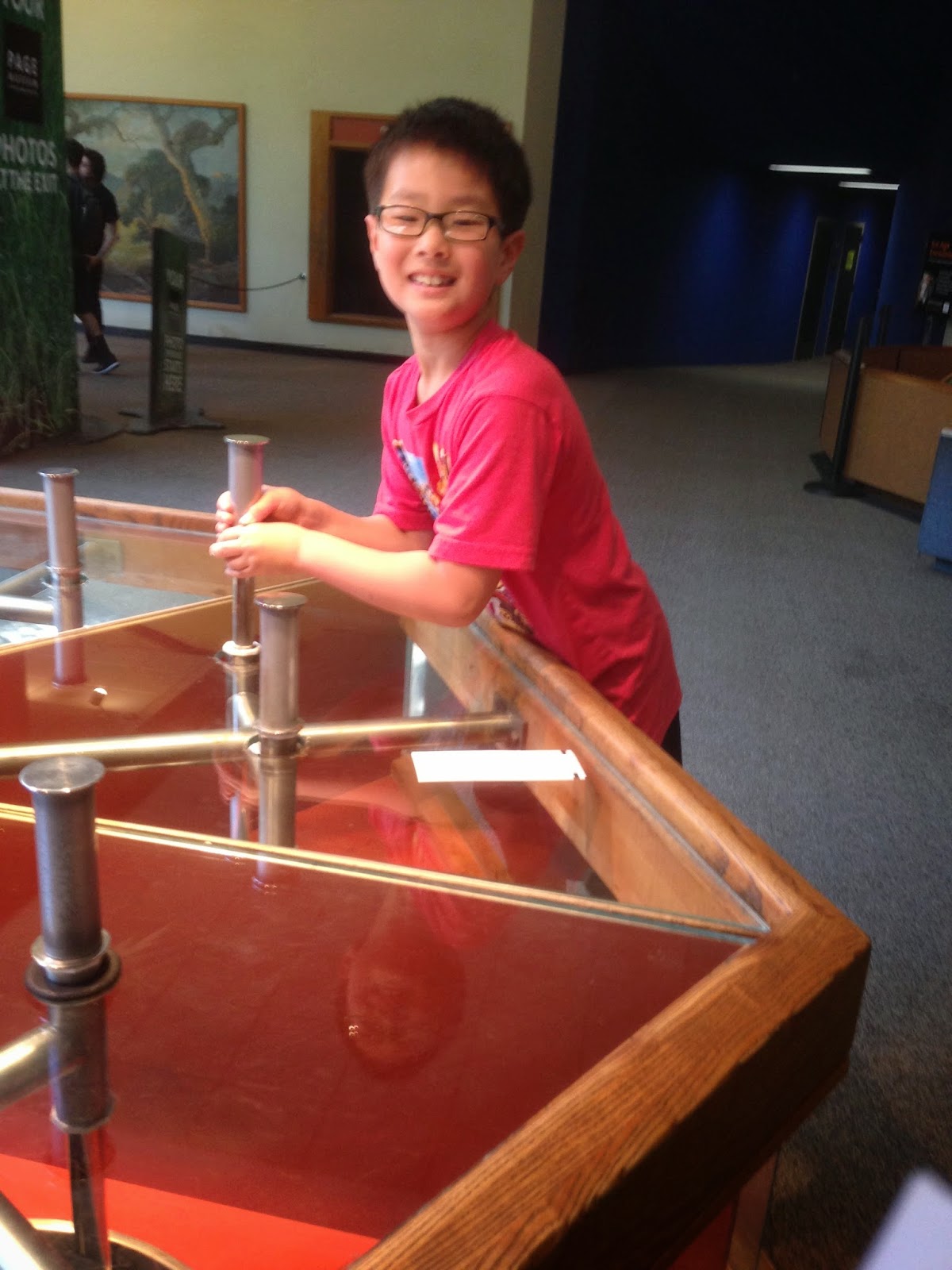 We thought it would be easier to leave at night so the kids could sleep. This worked in the past. But suddenly our boys have torsos and legs that are too long to fit comfortably even in the captains chairs of our swagger wagon. Imagine a wild animal moaning during its death throes--three hours of this before we finally got to our hotel pit stop for the night in Valencia. The next day we got up, enjoyed a free breakfast, and then made our way to the La Brea Tar Pits. We had driven by it several times while we lived in LA, but had never stopped for an official visit. The kids breezed through the museum in less than an hour. They enjoyed the exhibits and the short films. I enjoyed watching the archaeologists on display in the Fishbowl (they work behind glass so museum guests can see what they are doing). Then HRE spent half an hour outside rolling down the big hill that makes up the sides of the museum. I think they may have looked into the actual tar pit for 15 seconds. 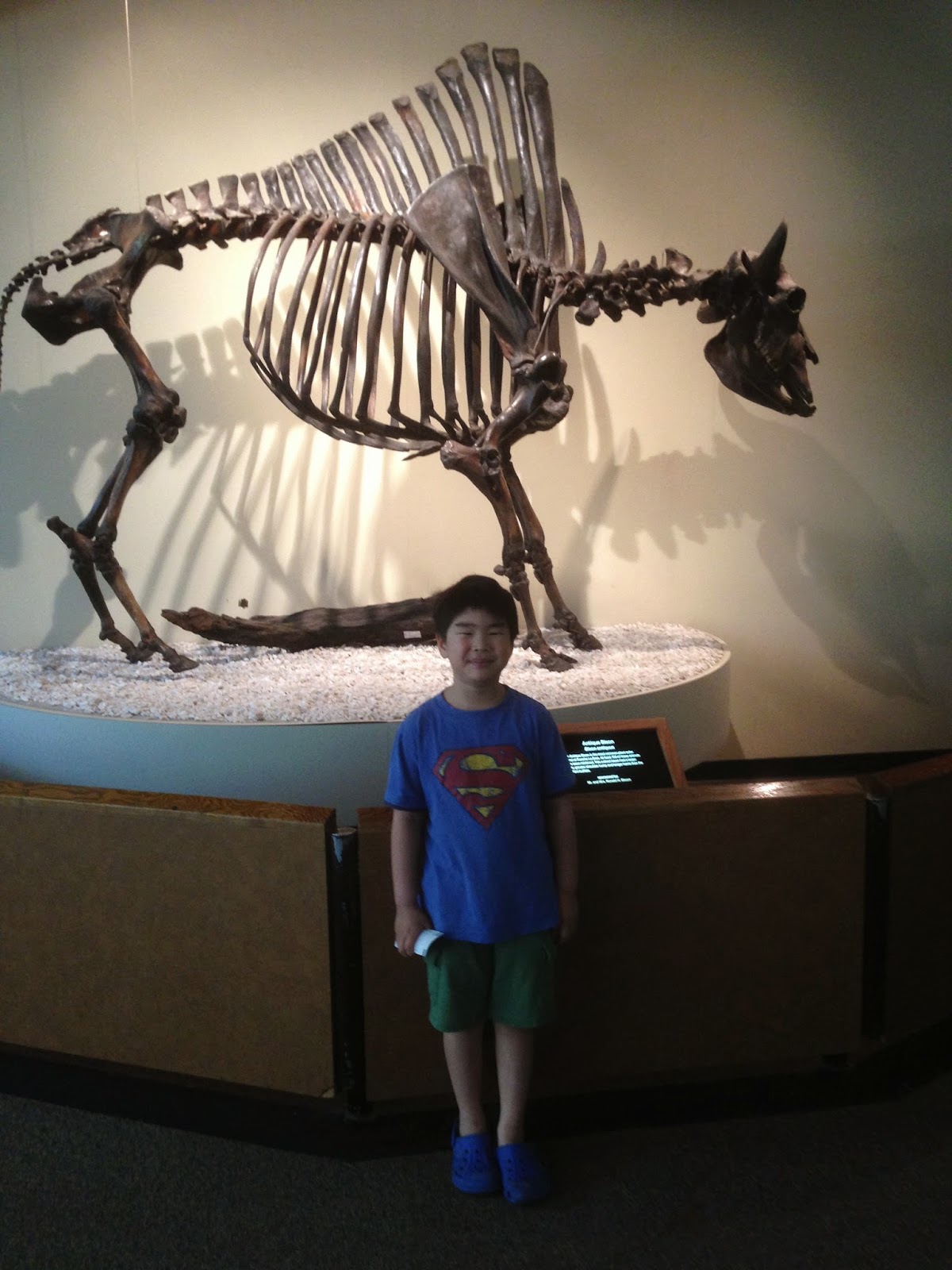 I was glad we stopped by because now we know what it's all about. One of the funniest moments happened at the display of G. Allan Hancock's office. (Captain Hancock had donated the land for the museum.) A group of kids was there for a field trip and their teacher pointed to an object and said, "Kids, that is called a typewriter." I thought it was so funny that these kids had probably never seen an actual typewriter before. I also noticed that the teacher didn't explain what a typewriter did, so I wonder if those kids actually understood that it was used to produce letters in the medieval ages when computers didn't exist. 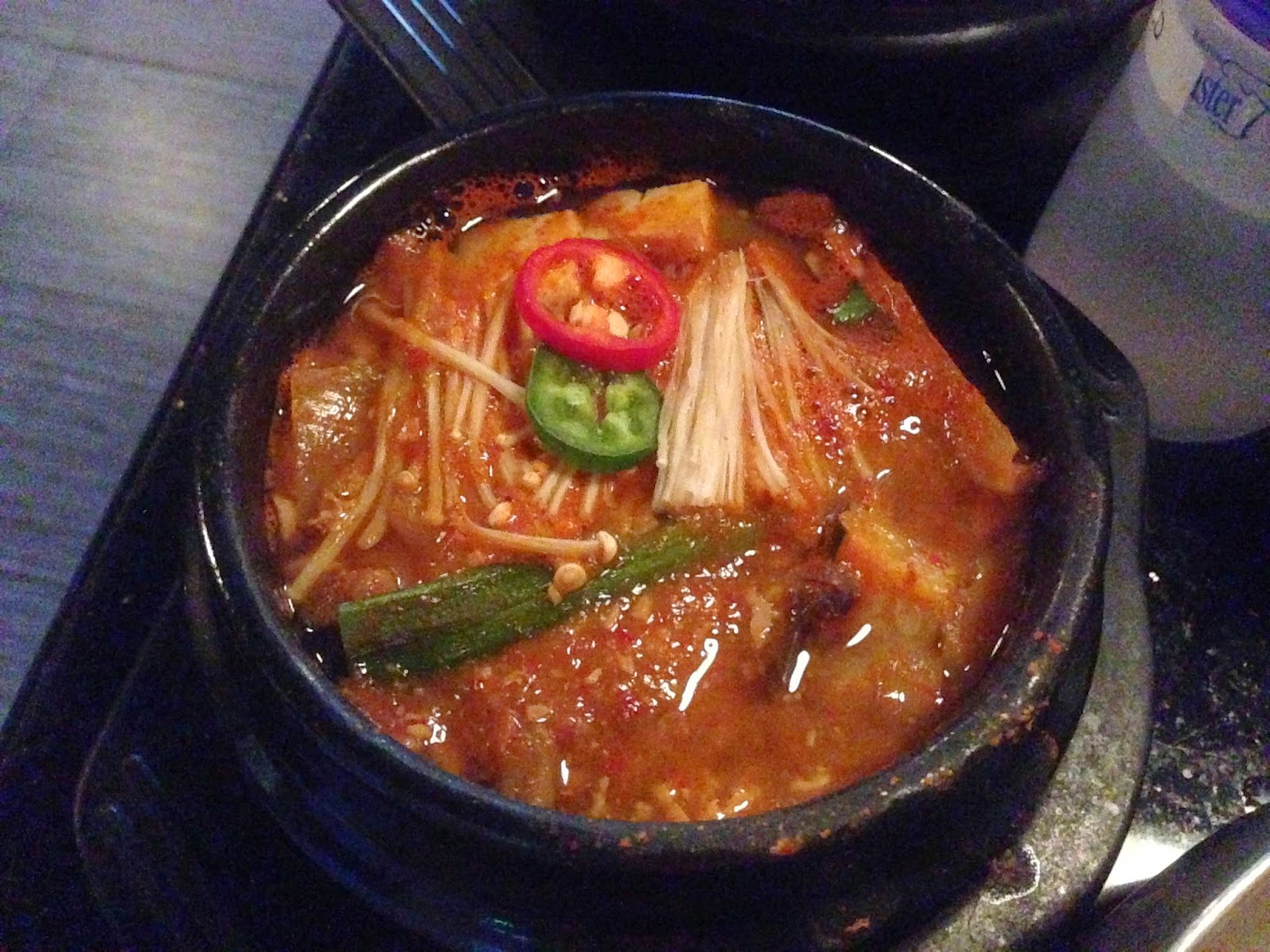 After our short visit, I asked Siri to give me some options for nearby Korean restaurants. She came up with several, but GENWA Korean BBQ was the highest-rated and I remembered passing it on our way to the museum. It was really hard to make the decision, they had me at "25 banchan (side dishes)." The restaurant is very close to the La Brea Tar Pits and has the benefit of free parking. We ordered udon for picky eater H, soft tofu soup for R and E, naeng myun (cold buckwheat noodles in broth) and a combo chicken kalbi ssam bap and dwenjang jjigae for me. They were very good to the kids, bringing them kids cups and plates and the standard coloring sets. 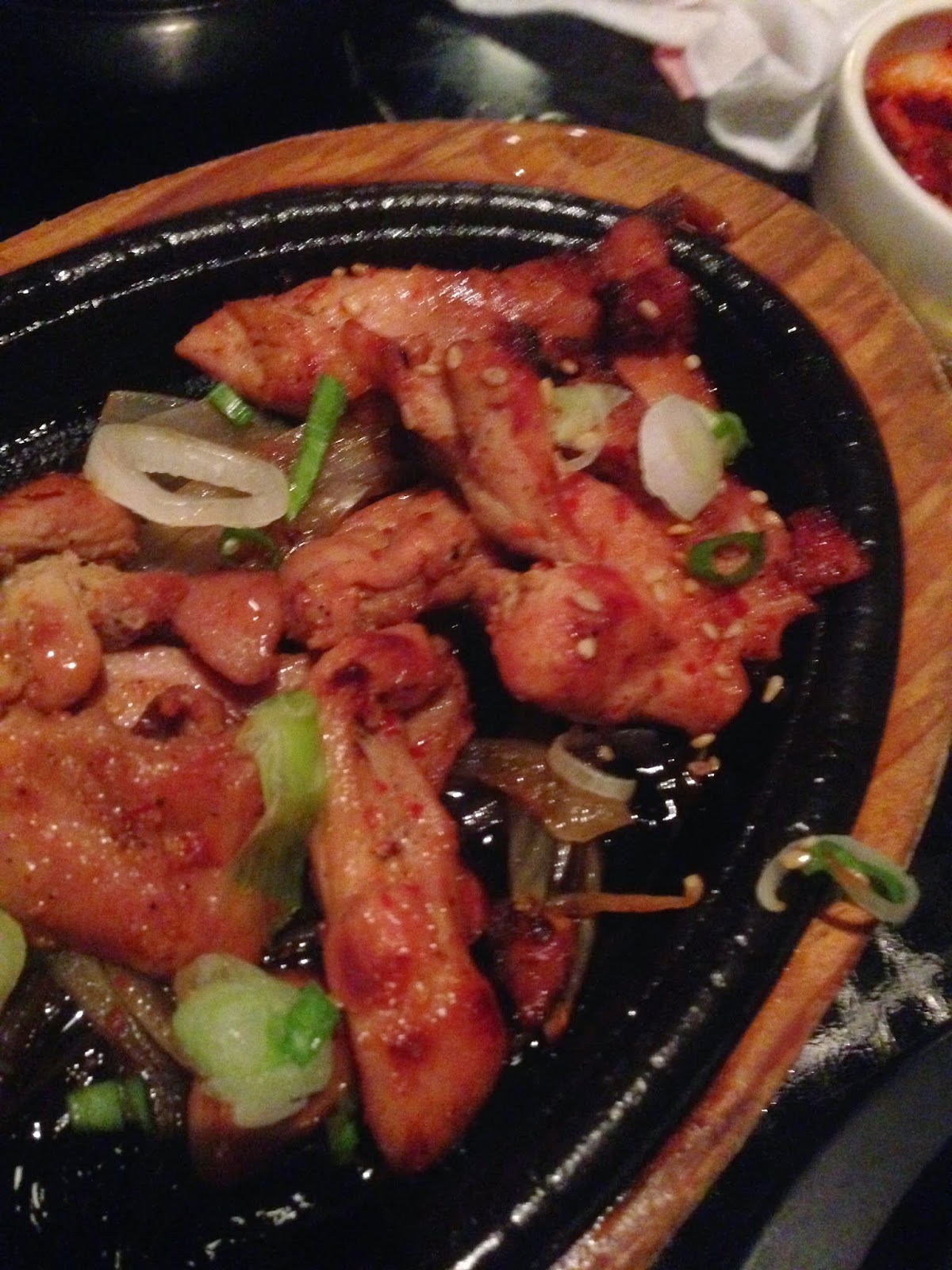 Everything was delicious and fresh. Stewart commented that it was the freshest Korean food he had ever eaten. All the vegetables and banchan tasted like they came straight from the farmers market. It was the most joyous Korean food experience in recent memory. I wish I had taken a photo of the banchan when it came but I was too excited to start eating and forgot! I couldn't even eat the dwenjang jjigae there because there was too much eating to be done with just the banchan. They even brought us the egg casserole as a "service." I was so happy. After I ate to the brink of explosion, they brought us shikhae and lollipops for dessert. The lunch prices are entirely reasonable and I would recommend it to anyone making a trip into LA. I'm extremely sensitive to MSG so I did have a bit of a reaction to the food afterwards, but that would not stop me from going there again. There was so much leftover I had the dwenjang jjigae for lunch the next day! A fruitful first day in LA. More to come!
Posted by Eunice at 12:31 PM