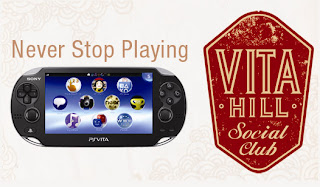 Whenever I get an invite to a blogger event that involves video games, I'm basically "in like Flynn" without even having to check my calendar. The degree to which the boys (including Stewart) love to play video games is probably equal to how much I love to watch Korean drama. It gave us a good reason to visit San Francisco on a Saturday afternoon, something that is pretty difficult for us to do without decent motivation (it's only an hour away but mentally seems like much more). The PS Vita blogger event this past Saturday was held at SF branch of the Vita Hill Social Club, one of eight across the country. Till the end of this month, gamers can drop in and test out the Vita solo or with friends in advance of the official release of the mobile device on 2-22. If you're lucky, you could even win a Vita.


The boys had a blast! Stewart agreed to write the following review in exchange for my holding Baby E so he could get more game time: 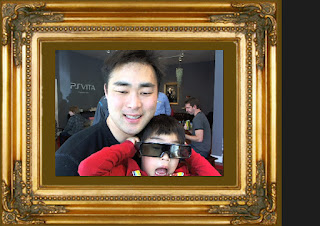 The world of mobile electronic gaming as of late has been taken by storm by a familiar company – Apple.  iPhones, iPad, and iPod Touches have thundered into the mobile gaming market by offering intuitive touch-based games and low-price point content.  This has allowed Apple to take share from such stalwart brands like the DS and PSP.  Sony has learned much in recent years and has taken the best aspects of the Apple revolution, and melded it with their own gaming expertise to create its new second generation PSP – the Vita.  It’s a platform that is still attractive to “gamers” while appealing to a more casual user base as well.


The Playstation Vita has a crystal clear, large touch sensitive screen to go along with a multitude of buttons, triggers, directional pads, and joysticks that is certain to appease any style of play.  Amazingly, they are able to cram all these features into the system without it feeling crowded or awkward.  Additionally, the system has two cameras mounted on the front and back that enables creative uses into different games.  And finally, there is software that allows for web-browsing and multi-player play.  The games that my kids and I sampled were a fighting game (Reality Fighters) and a driving game (Wipeout).

Reality Fighters is along the lines of the old arcade classics such as Street Fighter or Tekken with a unique twist.  This game takes advantage of the cameras so you can make your own fighter with any face you have taken a picture of.  There are also a multitude of options to customize your player’s look as well.  The graphics were quite impressive and the animation smooth.  How many games let you put your face on the fighter and then fight on anything on which the camera can focus? At one point H and I were fighting as ourselves on top of a table in the Vita Lounge, how cool is that? Definitely two thumbs up.  The second game, Wipeout, is a futuristic racer with intricate courses.  H especially loves racing games and this one was a winner according to him. He loved racing against me, him on the PS and me on the Vita, nice integration.

At its heart, the Vita is still a game-focused machine, with a lot of extra features that allow it to be used for so much more.  And in this world of multi-functional devices, this is a welcome change for the better. One interesting feature is the Near function which lets you know if other gamers are in the area. Game On! 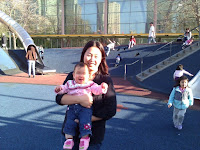 I'm back. Lest you are worried that the only thing H&R do is sit at home and play video games all day, you'll be happy to know that we had an amazing afternoon at Yerba Buena Gardens. The playground is a lot of fun for all ages, even Baby E (on my lap) went down the slide for the first time! We'll definitely be back to try the bowling, ice skating, children's museum and carousel. This time the boys didn't want to stop playing with the water in the sand pit. The Gardens are not just for kids, though, there is a fountain, a performance stage, several restaurants, a huge lawn for picnicking and a reflection pool and waterfall that comprise the Martin Luther King, Jr. Memorial. It was one of those rare sunny, warm days in San Francisco and we savored every minute of it, finally going home when the sun started to set. Indoor and outdoor gaming, what a perfect combination!

I was not compensated for this review. I had the opportunity to try out the new PS Vita in advance of its release at a blogger event.
Posted by Eunice at 10:42 PM