CONGRATULATIONS TO #6 AS CHOSEN BY RANDOM.ORG. THANKS EVERYONE FOR PARTICIPATING! THIS WILL PROBABLY BE MY LAST GIVEAWAY UNTIL THE BABY IS BORN. HOPE EVERYONE HAS A GREAT BEGINNING OF SUMMER!
******************************************************
It's June so time for H's annual birthday party bonanza. Just like last year, I was very tempted to skip a party altogether and just take him to Disneyland or Legoland and say that was for his "birthday," but just like last year, I caved when he started talking about his birthday and what he wanted for his party. I didn't want him to feel like we didn't do enough for his birthday especially since his baby sister is due around the same time. R, on the other hand, still doesn't care too much and didn't really have a party, we just took an enormous Thomas cake to his Sunday School class. Of course, that meant H had to look through the cake catalog and pick out his cake that he would have for his birthday six weeks later. And at his age, he doesn't forget. Unfortunately H never got to see his cake in one piece because they made me cut it up outside before bringing it into the classroom. I guess that's why the other parents had all brought cupcakes.

I was going to do just cake, but then H brought up the issue of goody bags. And so it ended up being much more work than I had anticipated, with multiple trips beforehand and trips to three different stores on the day of his school party. One of those trips was to the health food store to pick up a vegan cookie for a classmate who is allergic to eggs. The teacher mentioned twice how it would be nice if he could be included so I made the special trip AND THEN HE DIDN'T SHOW UP! Oh well! What matters is that H had a great time and was very proud and happy so it was worth it. He also loved his Spiderman cake (props to Safeway!) and had two servings!

We had to have his school party early because this next week is the last day of preschool. Then on his actual birthday is the dreaded CEC party. Every time we go to Chuck E Cheese, I end up holding R most of the time because he is afraid of Chuck E. It doesn't help that you can see the stage with the animatronic characters from every angle of the "restaurant" or that Chuck E comes out every 30 minutes and walks around. So R will probably spend the party crying into my shoulder or going home early with Auntie L. But that's what H wants, so he's getting it. After all, age five is the last birthday that H can have a CEC party since he will be in kindergarten next year and there is no amount of money that will get me into a CEC other than on a weekday morning.

To celebrate H's birthday, one Random Mommy reader will win a copy of the latest Pocoyo DVD, appropriately titled Pocoyo: Let's Party!  H&R LOVE to watch Pocoyo and this DVD was no exception. Pocoyo is a curious little boy with a big personality. He explores the world around him by creating great adventures with his friends Pato, Elly, Loula and Sleepy Bird. On Pocoyo: Let's Party!

, Pocoyo and his friends celebrate a birthday party, a welcome home party, a tea party and other adorable adventures. I am a huge fan of Pocoyo because it teaches lessons while being entertaining. There isn't a lot of the background graphics or heavy dialogue (most of the dialogue is done by the narrator) that can be overwhelming for young viewers, which is why I think it is equally appealing for both R and H. R's favorite episode on this 90 minute DVD is Pato Underwater (which he thinks is called Pocoyo Underwear) and H's favorite is Farewell Friends.

The 7-minute episodes are straightforward enough that H&R are able to watch it in Spanish and follow along. This is actually how they were introduced to Pocoyo, by watching on Univision. It's now also on Nick Jr. and PBS as well as having a huge presence on Youtube. Currently licensed for airing in over 150 territories worldwide, POCOYO has earned a host of international accolades including the prestigious BAFTA (British Academy of Film and Television Arts) for Best Animated Preschool Series, three Pucinella Prizes at Italy’s Cartoons on the Bay Festival and Best TV Series at the Annecy International Animation Film Festival in France. For more fun Pocoyo content, you can find fun Pocoyo party activity pages for FREE online, including party coasters, party invitations and party hats! In addition, the Pocoyize application, which allows users to create their own POCOYO-style avatar, complete with personalized hair style, skin and eye color and clothes, has proven to be a huge hit both online and via iPhone® with approximately 11 million people Pocoyized to date. 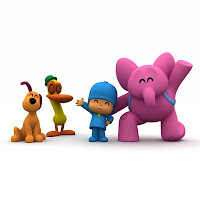 If you don't leave a qualifying comment and your e-mail address or public Blogger profile, your entry will be disqualified. I reserve the right to extend the contest period. At the end of the contest period, I will utilize Random.org to randomly choose the winner. The winner will be contacted by e-mail and will have 72 hours to respond to my e-mail. If the winner does not respond within 72 hours, the prize will go to the next place winner as decided by Random.org. This contest is open for US and Canadian Residents only. Good luck and have a great week!

I did not receive compensation for this post. I did receive a product sample to facilitate my review.
Posted by Eunice at 12:01 AM

Email ThisBlogThis!Share to TwitterShare to FacebookShare to Pinterest
Labels: Pocoyo

Happy birthday H! We miss you lots! We never need a reason to party, just a party to attend! We'll even create our own party! Kids love Pocoyo! Elliy and Pato are favs!
Going to like Pocoyo on FB, but have to figure out which one is real. Follow you on Twitter.
pcrepairmom at gmail dot com.

H - how did you get so big? I remember going to your first birthday party. Happy Birthday!

I just LOOOOOOVVVVEEEE parties and partying! Other than the obvious reasons to party (like anniversary of my first kiss and other things with hubby, one of my kids' birthdays, etc.) being alive is reason enough to party! We love sticking in a candle (into fruit, bread, whatever) and blowing it out because then it's an instant party at my house!

We party for whatever reason pops into our heads. Summer parties are the latest craze my grandson has taken a liking to. It's summer! Let's party!

I love to party, because I love to dance and celebrate amongst friends and family. love pocoyo too!

Happy Birthday! Can't imagine a better reason to celebrate than a birthday. But I love to have themed parties too - St. Paddy's Day, Halloween, it's nice outside, etc. Take care! Claudia

Happy Bday, H! Hispanics are ready to party at the drop of a hat: bdays, religious and national holidays, weddings, anniversaries, quinceaneras, baptisms, first communions, guests coming to visit, you name it!!
We also love Pocoyo and watch it in English and Spanish; it also airs in Vme, a channel from our DirecTV package in Spanish.
Good luck with the rest of the pregnancy!
elsaotero@yahoo.com

Happy Birthday H!!!! Thanks for sharing the adventure of his 5th birthday...cute story. Moises will be 3 this week and Mateo will be 5 next month. I'll send you a pic of their cake...haven't decided were to get it yet. Miss ya'll!!!
Melinda B