You know you're a mom of boys when you look for something in your purse and all you seem to have are legos and a Diego figurine. You also know you're a mom of boys when you find yourself buying $50 video games and supporting multiple video gaming platforms--who said boys are less expensive? Last week I was invited to preview a new MMO from Marvel at E3. Before I was a mom of boys, you could have said MMO and E3 to me till you were blue in the face and I wouldn't have known what you were talking about. Now I know an MMO game is a massively multiplayer online video game which is capable of supporting hundreds or thousands of players simultaneously globally. And E3, the Electronic Entertainment Expo, is just about the coolest expo for gaming fanatics out there. I couldn't believe how many people from all sorts of backgrounds were at the event. I walked around the LA Convention Center with a dazed look in my eyes. I kept thinking how much Stewart would have loved to be there and I sent him a text with an image of a game I knew he would absolutely love. I felt like I was part of the club since I was able to recognize the next rendition of games that I've seen Stewart and the boys playing. 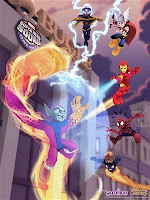 At E3, men and women waited hours at times to play the latest and greatest games. Luckily I didn't have to wait to get an introduction to Marvel's new Super Hero Squad Online coming out in 2011. If you've ever wanted to be a superhero, you can make your dream come true with Marvel's new MMO. You can explore the world of Marvel comics, playing as iconic Marvel Super Heroes like Spider-Man, Iron Man, Hulk, members of the The Fantastic Four and the X-Men, and dozen of other Marvel heroes including female characters like the Invisible Woman and Marvel Girl. Every hero has their own signature powers, abilities and even some special surprises.

I really liked the family-oriented universe of Super Hero City. There are no dark undertones like many of the MMOs and your character never dies. Super Hero Squad Online seems like a good place to start if your child is itching to jump into the world of MMOs. The characters are varied enough that the whole family can join and go on missions. I know that H will love it because he was mesmerized by the game poster I brought home from the event. He's already decided he's going to be Spider-Man. I was really surprised by how much he liked the poster and how long he stared at it. I don't know if he was imagining Spidey swinging all over Super Hero City, but it really held his attention. Sometimes I'm really surprised at what will click with the boys, but I should have known a superhero poster would do the trick. I can't wait till the whole family gets to try out the game in the beta phase this fall. Thank you Marvel for the demo and getting me on the floor of E3! 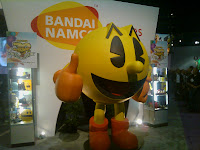 After my visit to E3, more fun was in store at NAMCO Bandai's 30th Anniversary Party for Pac-Man. My friend Elizabeth and I made our way over to LA Live for the private party. Since it was the same night as game 6 of the NBA Championships, we made sure to watch the clock so we wouldn't get caught up in the craziness at the end of the game. Police were on foot and on horse all around the Staples Center in case the Celtics won and a riot broke out. (I'm really not sure how horses help to control a riot--perhaps the threat of the horse lifting its tail up?) Back to the party--I was really excited to be a part of the celebration of a cultural icon. Through the presentation at the party I learned that Pac-Man has been played more than 10 billion times and was named "best arcade game of all time" by PC World magazine. It's also recognized by Guinness World Records as the "most successful coin-operated game" ever made. The song "Pac-Man Fever" cracked Billboard's top 10 chart in 1982 and Pac-Man himself graced the cover of TIME magazine. Of course it's common knowledge that Pac-Man was originally called Puck-Man in Japan, but the name was changed for obvious reasons when the game was released in the U.S. 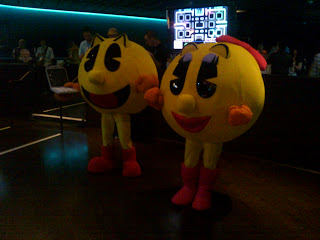 The party was about good food (catered by Wolfgang Puck, yum!) and good gaming; all the different Pac-Man games past, present and future were available for us to play on Ipads, Iphones, home gaming consoles, and arcade game machines, even the new Pac-Man Battle Royale. Hollywood Producer Avi Arad took the stage and confirmed the rumors of the new 3-D Pac-Man movie. I didn't see how a movie could be made showing Pac-Man eating the ghosts and the pellets but the trailer, which we watched wearing high-tech 3-D glasses, showed how it could be done. If you love playing Pac-Man as much as I do, one easy place to play is online. I love the Google Doodle (click insert coin to play) game and the many versions of the Pac-Man on Pac-Man's official website. If you're really into Pac-Man and want the whole world to know by driving around in a yellow Pac-Man car, NAMCO Bandai is celebrating the 30th Anniversary of Pac-Man by giving away a 2010 smart fortwo vehicle in the “Win a PAC-MAN Themed Car Sweepstakes!” Wakka Wakka.

I did not receive compensation for this post. I received a pass to E3 from Marvel to facilitate my review and an invitation from NAMCO Bandai to the Pac-Man anniversary party to learn more about Pac-Man.
Posted by Eunice at 11:31 AM

It was great to spend time with you in the Super Hero Squad Online booth Eunice and I am so happy your boys loved the poster!! I'll be sure to let you know when our beta starts and until then, the boys can always head over to HeroUp.com as we reveal a new character each week!