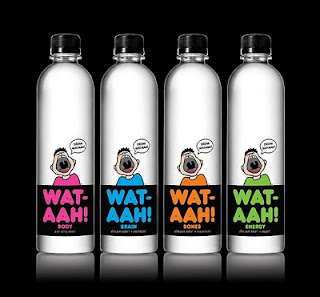 My boys do not like to drink plain water, unless I deliberately make them very thirsty and give them no alternative. Cruel, I know, but sometimes that's what a mama's got to do. So when I heard about a new functional water that was designed by kids and moms to be appealing to kids, I knew I had to give it a try. New York-based (another reason for me to give this company some love) Let There Be Water, LLC, sent me some samples of WAT-AAH! in advance of their West Coast launch. I was happy to pass along the information to my friends and contacts at schools in the LA area because I feel that there is a real need for more water choices in schools. I learned from the company's press release that, according to the Centers for Disease Control, 15% of children and teens are overweight (almost 9 million), and another 19% are considered at risk for becoming overweight-triple the statistic rates documented in the 1980s. A study by Harvard School of Public Health and Children's Hospital of Boston on the impact of sugar-enhanced drinks revealed that a young person has 1.6x more likelihood to become obese for EACH additional can or glass of sugar-sweetened drinks consumed above the daily average. I can only imagine what it's done to the average number of cavities in children.
When I was in high school, after cross country practice I would get a sugary drink from the vending machine. I didn't make the connection at the time but that's probably why I crashed so severely by the time I got home. No one really told us to drink water; t 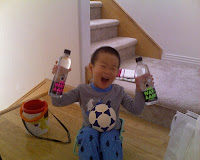 hat sugary drinks would deplete our energy right when we needed it the most, when we got home and tried to do our homework. I definitely think if there had been a product like WAT-AAH! back then--that equated water to cool--there would have been more of a chance that I pick that over the kiwi strawberry can of sugar.

I tried the different kinds of WAT-AAH! and it has a very clean taste. I love the fact that three of the waters have added calcium and electrolytes and other minerals that our bodies need. I know I don't get enough calcium and drinking water with calcium is definitely more appealing to me than taking those big white calcium pills. Try it out for yourself. The West Coast launch is on April 1 and the product will be available at Whole Foods and other natural food stores. For more information, you can go to the WAT-AAH! website, follow on Twitter, become a Facebook Fan, and check out their latest website, Blame it on the SUG-AAH!

I did not receive compensation for this post. I received product samples that facilitated my review.
Posted by Eunice at 7:10 PM

Email ThisBlogThis!Share to TwitterShare to FacebookShare to Pinterest
Labels: WAT-AAH

Thanks Eunice for the great review!

We feature you in our blog!