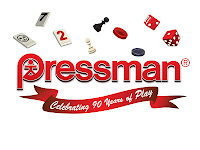 If you're a parent of young kids, you probably have more than a couple board games. And I bet those board games have cards and pieces that get lost and roam all around the house. I find play money and game pieces that are in various stages of decay all over the place. Stewart has fallen down the stairs after stepping on a chess piece! So when I got the opportunity to review some iPad games from Pressman Toys with the boys, I jumped on it! iPieces are games that you can play on iPads with game pieces made from special patent-pending conductive plastic. The age range is 4+ and all games are multi player.

The first game the boys reviewed on was iPieces Air Hockey. You turn your iPad into an on-the-go air hockey table! When the buzzer sounds, you move your iPieces striker, go for the animated puck, and try to score a goal in your opponent’s net. Each player can represent a country of their choice to compete in a variety of fun and exciting tournaments.  The game includes two iPieces air hockey strikers and free downloadable app for iPad. This was really exciting for the boys because they always want to play the game when we go to the bowling alley. But who wants to pay $2 each time to play? Not this mom. Now I can tell them they have it on their iPad so they can play it at home! R's favorite part of the game is the randomly floating +2, which gives you an extra point if you make the goal.

Another game that the boys love and have already destroyed is a certain sweet confection game that leads you to the end of a rainbow path. I find the cards for this game everywhere and I was definitely ready try a similar game without the cards and gingerbread men pieces in random corners of the house. To play the iPieces Game of Goose you choose a goose-shaped iPiece, tap the virtual die to “roll,” and move around the interactive game board.  You can see how the real goose iPieces unlock fantastic visual and sound animations, as virtual geese fly across the game board or get stuck in a well.  The game includes six goose iPieces and free downloadable app for iPad. R loves to play this game by himself, so he can finally get a turn at winning. H has issues with letting anyone else win and R strangely lets H win most of the time. Brotherly love?

These are definitely games we will be playing during our cross-country flight this Thanksgiving. If you want more information, Pressman Toys has uploaded videos to Youtube for iPieces Air Hockey and iPieces Game of Goose. Let's play!

I did not receive compensation for this post. I received product samples to facilitate my review.
Posted by Eunice at 4:45 PM