From Left to Write Book Club: The Kids Are All Right 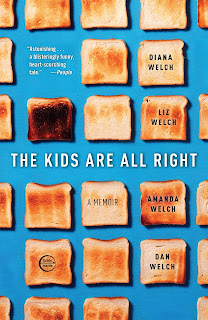 Today’s post is part of the From Left to Write online book club. The idea of this book club is not to write a book review but to write a post in which the blogger connects that month’s book to an experience from his/her own life. October’s book is The Kids Are All Right, a memoir written by four siblings: Diana, Liz, Amanda and Dan Welch.

When I first saw the book title "The Kids Are All Right" I thought that it was somehow connected to the movie with the same name. It's not. It's a memoir in which the four Welch siblings, orphaned in their youth in the mid-1980s, recount by turns their memories and impressions of that painful time. What really struck me while I was reading this book was the amount of drug use that went on among the older siblings. It's really amazing that they are all alive, much less "all right." I think if I had read this book a few months ago, I would have judged these siblings very harshly because of it.

Two months ago, I went to the GYN for my annual check-up. I talked to the doctor about how seriously ill I felt for two weeks out of every month right before and during the monthly gift from nature. I had spoken with a male GYN about six years ago about this and he did not take me seriously at all. He told me to take some B vitamins and exercise more. I ended up leaving that practice because of his callous attitude, but his dismissal of my symptoms prevented me from bringing it up until this last visit. Well, this time around, my female GYN did take me seriously. After listening to all my symptoms the doctor said I had premenstral dysphoric disorder (PMDD). She prescribed a drug that I should take during the two weeks every month. I was hesitant to do it, but I knew I had no choice, at least this month, because the two weeks coincided with the San Jose Half Marathon. I knew I couldn't run it if I felt half-dead. So I took the drug. And it was AMAZING. I couldn't believe I had suffered with the extreme pain and fatigue I felt every month for the past TWENTY years (other than the months I was pregnant and the two months after giving birth each time). In high school I would go to the nurse's office and sleep there for half the day because of the pain. At work, when I had my own office, I would lie down on the ground because of the dizziness and fatigue. Sometimes I would feel like I was unfit to drive. And Stewart can tell you how irritable I would get during those weeks. I can't believe there was something that could have helped me avoid all that agony, maybe not in high school but at least during my adult years.

During those two weeks this past month, as usual every morning I woke up and felt like digging my way into the ground so I could reach my final resting spot. Then I would take the pill and about 20 minutes later, I would feel energized and myself again. It was like magic. I couldn't believe how effective it was! I would not have been able to complete the race training or made it through the move to San Jose if I hadn't taken the drug. If a little tiny pill could make such a difference, I can only imagine the euphoria and high from something like cocaine or amphetamines. And if both my parents were dead and my siblings and I were all separated like the Welch siblings, I can understand how those drugs may have helped me survive. I'm not excusing their illegal drug use, but I can empathize as to why they needed to do it. I'm glad that the Welch siblings made it through the years alive and are now sober.

I don't know if I will continue to take the drug now that there is no compelling reason like the race to do it. I don't want to become dependent on it and need to get an increased dosage over time. But I'm glad I did it because it gave me an insight I didn't have before, since I had never taken drugs or smoked anything in my life. I had been so reluctant to take the drug because I felt there was stigma attached to it and that I was somehow weak for doing it. But sometimes it takes more strength to admit you need help, chemical or otherwise. This is a very personal topic and I debated whether I should blog about it. When I thought about the past 20 years where I could have had relief if someone I knew had talked to me about it, I knew I had to share. If you are a silent sufferer of PMDD like I was, there are options out there. You don't have to be in pain! It is a recognized illness and treatable with medication. You can find more information and see if your symptoms correlate with the disorder here and here. Good luck!

I received a free copy of The Kids Are All Right as part of the book club. If you would like to read the story of how these siblings made it through incredible hardship and pain, you can buy the book here

. More information is available on their website.
Posted by Eunice at 8:02 PM

Email ThisBlogThis!Share to TwitterShare to FacebookShare to Pinterest
Labels: From Left to Write, PMDD, The Kids Are All Right

I am so glad that you found something to make you feel better! I agree with what you imply at the beginning of your post: that drugs - prescribed and otherwise - are stigmatized in our society, particularly by those who do not use them.

I think my siblings were self-medicating to deal with the trauma of everything good in their lives falling apart around them. But, it is important to point out something Amanda likes remind us: She was doing drugs to cope with her pain, yes. But she was also doing drugs with kids whose families were intact, who had sit-down dinners every night, who parents were there for them and loved them.

Personally, I believe that experimenting with drugs can a healthy part of growing up. But I do agree that my sibs were in danger at times, and I'm so sorry that their pain was such that they had to numb it quite so thoroughly.

thank you so much for reading the Kids are All Right, Eunice!

Thanks for your comments Diana. I'm glad your siblings did not become addicted and have found other ways to overcome the pain. When I see some of the "celebrities" out there who could have it all but are caught up in drug addiction, it seems like such a waste of a life. That's why I think experimenting is so dangerous. Some people have the gene that makes them susceptible to becoming addicts after just one use and you don't really know that when you're young.
I hope the book will bring these topics up for conversation across the country.
Best,
Eunice