When Stewart first asked me at the beginning of summer if I wanted to do a road trip to the Pacific Northwest, I said, "NO WAY!" After all, whose idea of fun is sitting in a sedan for 18 hours with two kids in the back screaming that they want to get out? Not mine. I thought the topic was closed but then two things happened: 1) another family in our church made the drive with their THREE kids and they took 101 (the scenic route), making the trip even longer, and told Stewart how "not bad" it was, and (2) I read about Sharlene Earnshaw (Double the Adventure), the mother of 3-yr old twins who did a 24-day road trip last summer, most of it as a single parent since her husband had to work. Ok, so that kind of shamed me into green lighting the long trip.

It was a ten-day trip, four of which were spent driving. The drive up was uneventful. We spent the night in Sacramento and made it from Sacramento to Portland in nine hours. Stewart has a lot of extended family members in Portland and his cousin opened up her home to us to use as home base. H&R had been eagerly anticipating playing with six-year old second cousin C for the weeks leading up to the trip. When we left Sacramento H wouldn't even eat breakfast because he didn't want to waste time when we could be on our way to see C. I was a little worried that such high expectations would lead to disappointment, but the three of them had such fun during the entire visit, it really made me wish they lived closer (like next door).

My first full day in Portland, I spent some quality time with my good friend Minah and her daughter E in downtown Portland doing some shopping and walking through Yoshida's Sand in the City. Stewart and the boys accompanied his cousin to church and then to lunch at the Old Wives' Tales restaurant, described as being for "young, liberal-minded families" (Frommers Portable Portland

). I thought it was more than fate that made me miss that particular lunch. Instead Minah treated me to lunch at Urban Farmer in the Nines hotel, definitely a place the boys would have destroyed. Thanks so much Minah! 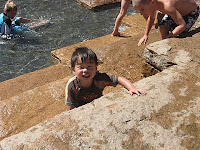 Some of the very fun things the kids enjoyed in Portland were: Elephant Park near the Portland Zoo, Out of This World (definitely check this place out if you are ever in Portland with young kids), and blueberry picking. But the most fun was had at the fountain in Jamison Square. The water spills from in between tiered steps until it fills a pool, drains out and repeats the process all day long. The result is that kids have a constantly fresh supply of water to wade and play in and adults can sit on the steps and visit while watching their kids. There is also a lawn area for picnics form which the action is all visible. R usually shows trepidation when faced with something new, but he could have stayed here all day. He loved going up and down the steps, collecting water in a cup and then dumping it out. We sat on the grass and he would come back every so often to get a snack and then go back out there. The park is surrounded by a great bakery, ice cream shop, pizza shop, and other stores in the Pearl District (like Powells, the largest and best physical bookstore in the world!) making it the perfect weekend family destination. We were there on a weekday, so it wasn't as crowded and we were lucky enough to get a shaded parking spot. Score! I wish we had something like this in SoCal.

Mid-week we made the drive to Seattle to visit my friend Rayray. I've known Rayray ever since freshman year in college and sometimes it's amazing to me that we are still good friends since we have both moved all around the globe (Rayray was a peace corps volunteer in Africa!) every few years. This visit was the first time I met her son, MR. I was amazed at how much love I felt towards this little guy. It might have been because he was so friendly and cute or maybe it was because I knew all the crazy things that Rayray has experienced to get to the point to be his mom. We were all really sad when we had to say good-bye.

Since we were in Seattle, we had to do some Seattle touristy things. We walked down to the Pike Street Market (where H lost a shoe and thus had to be carried the rest of the afternoon) and took the Monorail to the Space Needle. At the Pike Street Market, we had the best mac and cheese in the world at Beecher's Handmade Cheese. A small cup was $5 but it fed both boys till they were full. It was so rich and flavorful even a small serving will satisfy. I definitely need to find that recipe online somewhere. I'm sure someone has cracked the secret. We also did the obligatory walk past the first Starbucks (Isn't it hilarious that the Starbucks employee is posing for our photo?). We ate at the Crab Pot because it had looked so good when Adam Richman had eaten there in Man v. Food

. It was tasty but the food looked better on television--isn't that always the case? 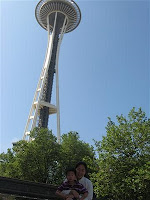 Our trip to the Space Needle turned into a "more than we had hoped for" experience. The boys loved the ride on the Monorail to get there but weren't really enjoying the observation deck because it was overcast at the time and the view wasn't as great as it could have been. Just as we were about to take a photo and leave, we ran into another family with two boys. They were leaving Seattle and gave us the rest of their city passes to use during our trip. Sometimes it takes the kindness of strangers to remind me that people are fundamentally decent. Their generosity made it possible for us to visit the Experience Music Project and go an Argosy Cruise. H&R loved the EMP because they were able to try instruments and make as much noise as they wanted. We even went on stage to perform as a rock band. H was really mad about this when he realized that we weren't going to perform before a real audience. He was so upset he stopped playing midway through the song we picked, "Twist and Shout."

R had cried the entire ten minutes before going into the room with the stage, but once he got in there he loved it. I've learned with him that he has a lot of anxiety when faced with the unknown, but will be fine once you give him the initial push. That's why when he cried and screamed bloody murder before we got on the boat tour and then after we were on but before the boat left dock, I knew he would be fine once the boat started moving. And he was. He loved climbing all around the boat and seeing the jellyfish in the water. As parents, sometimes the best thing we can do for our kids is to push them to go out of their comfort zone. If not, they might not develop and grow to their full potential. That's something that I've learned applies to myself as well. I find that if I'm not challenged or learning something, I can become depressed. I didn't want R to miss out on having fun because of his initial fears. I'm glad it worked out, though, because if he didn't stop crying on the boat I wouldn't have been able to swim with him to shore!

The week went by quickly with lots of quality time spent with family and I'm so glad we did it. I don't know if we'll ever do it again, at least not until we buy a minivan because I spent most of the time sitting between the two car seats in the back seat and my behind was sore by the time we got back to Los Angeles. Coming back, we made the mistake of taking 101 part of the way, not knowing that the Gilroy Garlic Festival was in full swing. Never again--I-5 might not have anything worth seeing but at least it will get you home quickly! If you decide to visit the Pacific Northwest, these are two great guidebooks we read before the trip: 1) Frommer's Oregon

. You can also find extensive information online at uptake.com for Portland and Seattle.


Hope you and your family have a great vacation this summer!
Posted by Eunice at 10:33 PM

Eunice! I'm so glad your vacation was a success! That Jamison Square water steps look SO COOL! Aubrey would go nuts for that. IT looks like you got to do so many fun things and the boys traveled well. Yay!

Hope the rest of the summer is going well! It's just starting to get pretty hectic over here, but it's mostly for my work. Hope we can get together soon! xo